At De La Salle Catholic College Cronulla, we empower students to organise themselves for daily school life by giving them the tools they need to succeed. Students are able to become independent, confident learners, which sets them up to navigate the complexity and challenges of the modern world.

Be sure to bookmark this page for updates to student policies and procedures, event information and more. 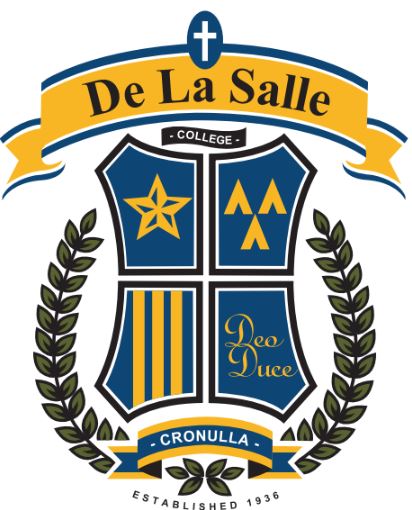 The Star: It was the faith of the Magi that enabled him to follow the Star to Bethlehem and to discover in a baby wrapped in bands of cloth the Son of God. It is this faith that guides the Brothers, Teachers, Support Staff, and Students of the college to discover the presence of this same God in the ordinary events of their lives.

The Shamrock Cross: The Cross, originally a symbol of a criminal’s death and despair became, through the death of Jesus, the sign of victory of life over death, and hope over despair. The rounded ends which give the impression of a Shamrock is a reminder of the Irish tradition on which the college was founded because the first De La Salle Brothers who came to Cronulla were Irish. The Shamrock has been through the centuries a reminder of the inner life of God as father, Son, and Holy Spirit.

The Palm Leaves: These are a sign of victory and in the Church have become the symbol of the greatest victory – that of life over death.

Deo Duce: This is a Latin expression, which means with, by, or through God as Leader. It is an attempt to summarise the spirituality of this community of believers. The college members are called to centre their lives on God. God is present in all the events of life. He is acting in our lives. We have been given the gift of faith to discover this caring presence of the Lord in Creation and in History.

The Colours Blue and Gold: These are the colours of Mary, the instrument God used to announce salvation to the world and Faith, the light which guided the Magi and all people of good will to discover the action of God in the world.